The invasion failed! Get your monsters back home before they’re killed in retreat.

Darkmoor’s foul armies amassed their legions to reach the capital city. In spite of their well-laid machinations, something awaits them beyond the city walls: the ancient heroes of the kingdom who have come to the council of the king. Failing to besiege the city, each of the overlord’s minions must now flee to Darkmoor, lest they be captured—or worse. 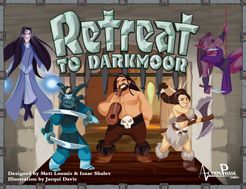 In Retreat to Darkmoor, 2-4 players assume the positions of the dark overlords of the world, each commanding the same minion deck. Your goal: to successfully flee the mythical heroes and take shelter in the numerous locations of Darkmoor. Any minion who manages to flee will count against position power, but beware of your so-called collaborators, as each overlord even scores points to destroy rival minions!